Can an apple tree blossom and then bear fruit at the very end of summer as the sun’s rays weaken daily? That’s what has happened to the one apple tree in my small backyard in the city. This small miracle has touched only one branch on the tree.

What thoughts come to my mind? Certainly the saying “late bloomer”. That describes what I am, especially in light of finally publishing my first novel when it has been my dream to be a writer since I was eight. Here I am, fifty years later. I’ll take the apples as a good omen.

My son’s girlfriend, Kaitlyn, handed me another clue. When I was talking about this strange anomoly of the apples, she commented, “Maybe Juno touched the branch.” I was astounded. In my Young Adult novel, Rebels from Olympus, which is in the final stages of being self-published, the Roman goddess Juno, loosely disguised as June in the story, walks by an almost-dead ficus tree, commands it to perk up and then touches a withering leaf. The main character, Justus, within minutes, notices that the tree has miraculously flourished into a state of perfect health.

Was this tree touched by Juno? I would like to believe in the possibility. Even the leaves around the young apples are new and vital. Will there be mature apples at Christmas? Highly unlikely. I’m sure the first frost will kill them off.  It is intriguing to consider how the symbolism of the apple tree has been linked to Jesus in some folklore. There’s also a Christmas carol titled, Jesus Christ the Apple Tree. I may listen to that carol often this Yuletide.

I cut the apple-bearing branch from the tree the other day before the apples shrivel once our area does get hit with frigid weather. I placed the branch on my mantel with one of my nativity sets. The green of the apples is quite alive and fluorescent! 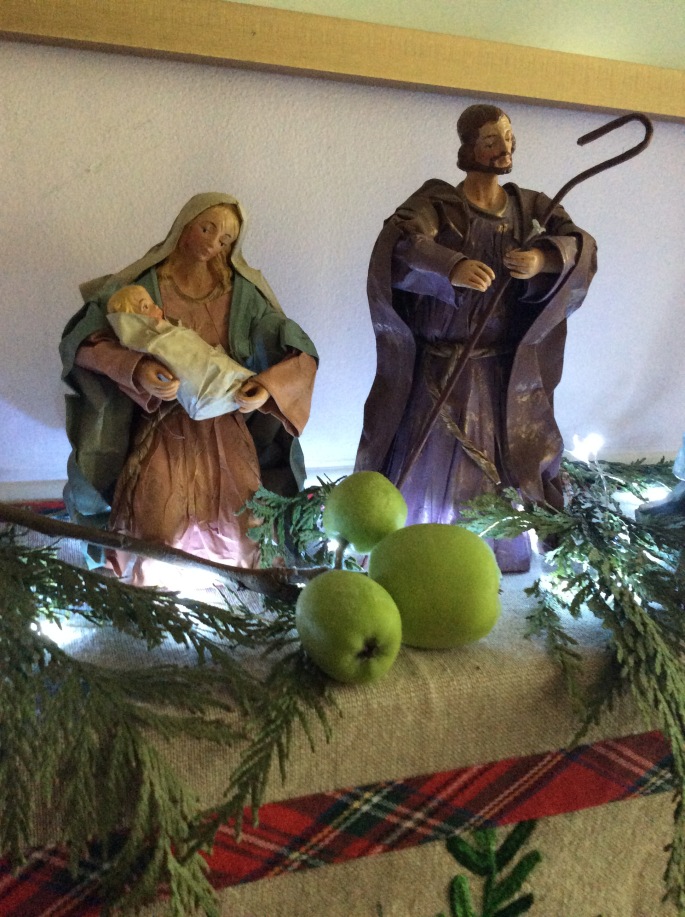 Ever since three rebellious gods moved in next door, life has never been the same for Justus. His mom plays Twister with a goddess. He gets his first kiss with the secret love of his life. His evil step-grandmother tries to kill him.